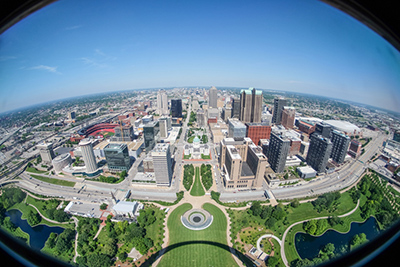 When you think of St. Louis, Missouri, what comes to mind? Freezing winter weather? Sports teams? Or maybe you have family that lives there? It turns out, one of the most spectacular architectural structures in the world resides in the heart of St. Louis. Known to many as the “St. Louis Arch”, the actual name is the “Gateway Arch”.

In this blog, we’ll discuss how The Gateway Arch received its name, how it was constructed and what it is used for today.

The Meaning Behind the Name

When the Louisiana Purchase added the Louisiana Territory to the United States, it created new land for westward development. Due to the Location of St. Louis in accordance with the Mississippi River, St. Louis was key to the expansion. To many, it was regarded as the “gateway” to the west, in turn, the inspiration for the Gateway Arch.

Construction of the Arch 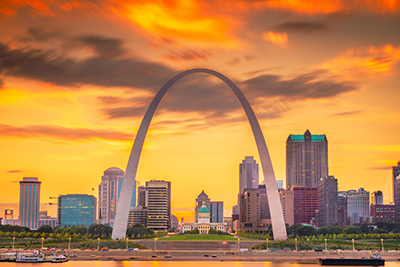 This one-of-a-kind architectural marvel stands 630 feet high and 630 feet wide! Coated in glistening stainless steel, the arch towers over the west bank of the Mississippi River, in the exact location where St. Louis was founded. It is both the tallest man-made monument in the United States and the tallest arch in the world.

The initial stages of the Gateway Arch project were led by architect Eero Saarinen and structural engineer Hannskarl Bandel in 1947. Construction lasted 2 years and 8 months and concluded in October 1965. The total cost of the arch was $13 million, which translates to $97 million today.

Section by section, the arch got closer to the sky (142 sections). The base consists of wide triangles and as you get closer to the top the sections become more and more narrow. When it was all said and done, the structure weighed 17,246 tons. Which might sound like a lot, but it would weigh much more if the inside wasn’t hallow.

What is Inside the Arch?

The hollow design inside of the arch allows for a tram system to transport visitors to the top, where there is an observation deck with 16 windows on each side, allowing you to see up to 30 miles into the distance! On the same premises as the arch is the Museum at the Gateway Arch, where you can follow Native Americans, explorers, pioneers and more throughout history.

We hope you enjoyed our blog about the historical Gateway Arch! Structures such as this have opened the door for future architects to push the boundaries of creative design.

For any of your residential or commercial architectural needs, call South Florida Architecture. Let’s Get Started!