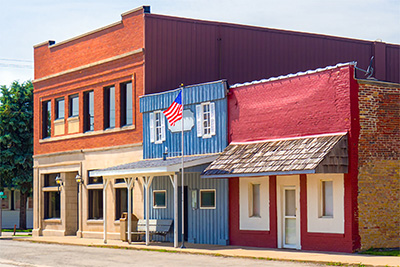 What is Commercial Architecture Style?

When we say architectural “style”, we are referring to the various details that are incorporated into an architectural building to give it a specific aesthetic. This can be anything from the building materials used to construct the commercial structure, to window patterns, architectural details, finishes and more.

You may be surprised to learn that not every commercial building has a defined style. Some rural and remote constructions build based on local materials, traditions and needs; this style is generally referred to as “vernacular.” This term is used to describe trends or details that are isolated to a very localized population.

On the flip side of that same coin, a commercial building can also feature multiple styles in one structure. A blend of two or more defined architectural styles is not at all uncommon and can give a structure both uniqueness and character.

What is Commercial Architecture Type?

Now that you know what “style” is, it is good to understand the definition behind commercial architectural types. Although the two terms sound synonymous, they are not. The word “type”, in relation to architecture, refers to the layout of the rooms within the building or its interior.

Type includes form and scale. Sometimes the design types can be matched to particular periods in history, but the lifespan of trends in architectural types can vary tremendously—from a decade to fifty years or more.

Here are a few distinct commercial architectural design styles you will likely recognize, even if you aren’t an architect yourself:

The Georgia style covers both retail and office spaces. An early design, it was commonly found between 1880 and the 1950s. Picture the old, rural general stores with the barn-like wooden siding with a front-gabled or front parapet entryway, or the suburban corner stores with a bright red brick exterior. Symmetrical with an entrance flanked by large windows, the Georgia style commercial buildings are easy to recognize. Sometimes they stand alone; other times they are connected to other buildings as part of a commercial strip that lines a city’s streets.

In the early 1900s, architects began to stretch the Georgia style into a multi-story retail-and-office setting. Although taller than the traditional Georgian commercial design, it still carries the same grand entryway recognizable from the street.

In the present day, you can find echoes of Georgia style commercial architecture within many of America’s current popular styles, including Craftsman, Colonial Revivals and Neoclassical.

Many other styles would make a comeback as Revivals in the late 1800s and early 1900s, including Tudor, Romanesque and Colonial.

In South Florida, the Mediterranean Revival style has remained very popular in both residential and commercial Architecture. In fact, they’re almost iconic. Recognizable by its pastel exteriors, red tile roofs, parapets, and large, sun-embracing windows, this particular style is often constructed of wood or concrete. The Mediterranean Revival style is especially popular in shopping centers, offices, condominiums, apartments, and homes, where it is often paired with the French Renaissance style.

Are you looking for a commercial architect in South Florida? Our highly experienced and amiable team can certainly help bring your commercial vision to life. Learn more about our Commercial Architecture services, including:

Contact us today to discuss your project and receive a complimentary estimate!